How To Claim Chaos Legion Airdrop

Chaos Legion General Sale 1.0 has ended. As we wait for General Sale 2.0 to start we have some goodies to look forward to. For those of you who might not know the airdrop cards for Chaos Legion drop two and three are ready and have been sent to those who qualify for them (Drop one already concluded: Doctor Blight). If you purchased 300+ Chaos Legion Packs you are guaranteed at least one regular foil. Unlike in the past there is no guarantee of a gold foil regardless of how many packs you have purchased. These airdrop cards are not auto put into our accounts, we have to claim them. Claiming is a very easy and simple process that I will showcase below while making my claim.

After you click the Claim Rewards icon the system will reveal to you how many airdropped cards you have received. If you purchased under 300 packs its possible that you won't get any. As I already noted, a 300 pack purchase guaranteed the purchaser at least one drop. I purchased a total of 308 packs so when I click Claim Rewards it should reveal at least one drop. If I'm real lucky it will turn gold (Lets find out together). 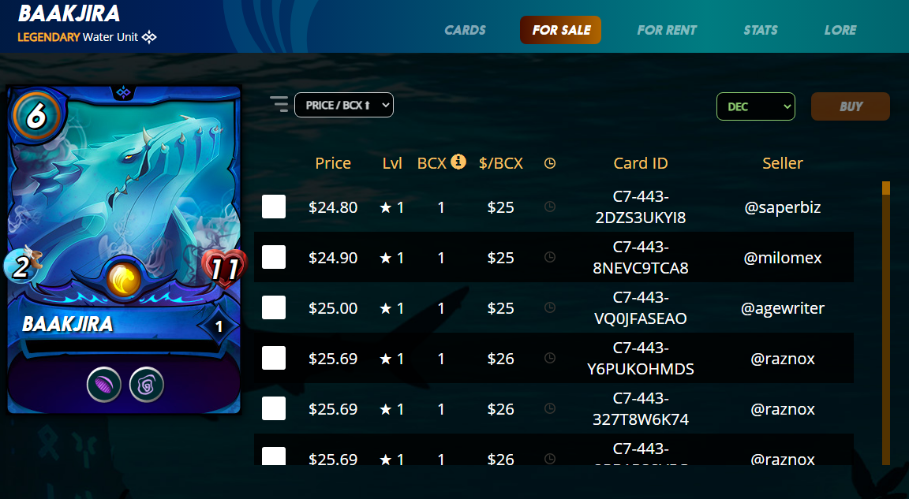 Looks like I didn't beat the odds this time. I got dropped one standard foil of the Legendary card known as BAAKJIRA. As the screenshots above show at level one it comes with two abilities (Dodge and Slow) and has eleven health plus two speed. The card does not have an attack and cost six mana to use in battle. But wait there's more :) As we noted at the start of this post, this airdrop is for two cards not just one. So once finished claiming the drop for BAAKJIRA we need to repeat the process to claim the next drop. 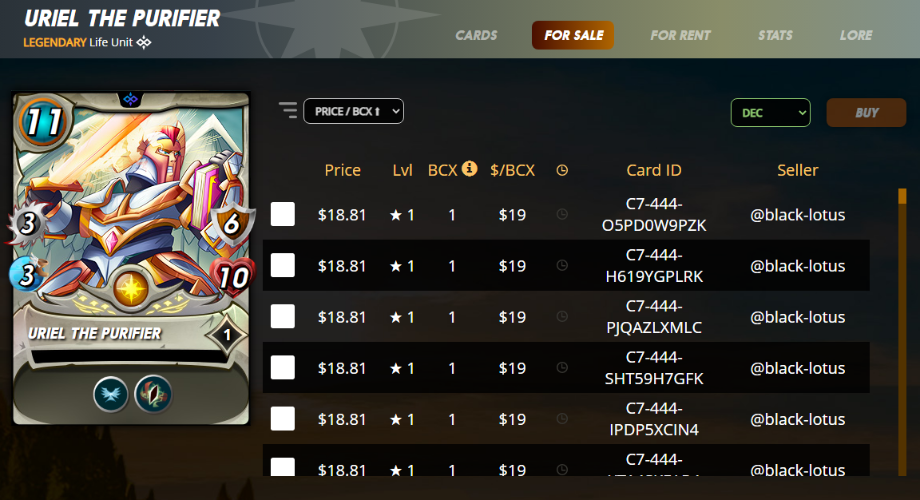 Once again I was not able to beat the odds (which is ok) and have been dropped one standard foil of the Splinterlands card known as URIEL THE PURIFIER. This card cost eleven mana to play and at level one comes with six shield plus ten health. It is sporting a three mele attack with three speed. On top of all that it has two abilities (Flying and Recharge). I like the design of both these airdropped cards and it will be interesting to see them in battle. If you missed out this time around and didn't get to participate or weren't airdropped any cards don't fret as there is still eleven more airdrops to go. No-one knows yet how many purchases we need for the next guaranteed drop but as always the higher the amount of packs one purchases from Splinterlands the higher the chance at max airdropped cards. Cards purchased on secondary markets such as Hive-Engine do not count towards receiving airdropped cards. This post has been manually curated by @bhattg from Indiaunited community. Join us on our Discord Server.

Do you know that you can earn a passive income by delegating your Leo power to @india-leo account? We share 100 % of the curation rewards with the delegators.

Please contribute to the community by upvoting this comment and posts made by @indiaunited.

Thanks for the manual curation.

Nice pull. I did not buy enough packs to get lucky. I will keep buying in the general sale in a few day.

There is still 11 more drops to go so plenty of time to hit some airdrop cards. IMO holding off until general sale is the safest bet as it allows us to get max packs for our buck.

I got a little luck this morning and got a GF Uriel. GF Legendary cards are a very rare thing for me, so I'm pretty happy!

lolztoken.com
What's the difference between in-laws and outlaws?
Outlaws are wanted.
Credit: lofone
@gregory-f, I sent you an $LOLZ on behalf of @rentmoney
Use the !LOL or !LOLZ command to share a joke and an $LOLZ. (1/4)
0
0
0.000
Reply

Nice, that is a good one.

One of those jokes that are funny because its true :)

So splinterlands is still alive?
because the dec/ sps tokens are very down from they dollar worth since months... 📜📉

Alive and doing very well. On the surface it might look like DEC is down but in fact its still way above its intended value. DEC was meant to float around the $1/1000 mark but currently is at over $4/1000. SPS was introduced at $0.018 USD and currently sits at around $0.18 USD. Plots of land that originally sold for $10 USD are being routinely traded for $400USD+. I suspect a further correction in some of these prices before another upswing takes place (thats crypto folks).

Thanks for the information
and nice to hear that!

I played many hours of splinterlands
and i thing it is time to come back! 😅

You weren't too lucky, they're good Cards anyway.

That is ok there is still 11 more drops to go :) I'm happy with the standard drop rate. I got a GFL Doctor Blight last drop with just 154 packs purchased so I can't complain this time around.

Very timely post @rentmoney
Thanks for walking through this instructions.
I didn't buy 300 packs, so my odds are very low, but I hope to Get Lucky
@shortsegments

P.S.
I am offering free delegations of a gold foil card for new investors to EasyDefi, if you send 100 Leo to @easydefi to invest in Cubfinance with our Pool, I will delegate you a level three Venari Knifer Gold Foil to use the entire time you are invested and earning close to 88% on your investment.

Good luck with the drop.

Hopefully there is a GFL waiting for you.

Thanks for the info.

I was unlucky this time, got 0 cards from the 100 packs I can afford. Anyways, I got good cards from openning them. Cheers to you man!

I'm happy to hear you got some good cards from opening them. There is still eleven more drops to go so hopefully you hit a few drops from them. !BEER / !PIZZA / !LUV

Congratulations @rentmoney! You have completed the following achievement on the Hive blockchain and have been rewarded with new badge(s):

Two free cards not bad! That's nearly $40+ just from that free airdrop I mean you can't complain about that and there's many more to come!

Yay! 🤗
Your content has been boosted with Ecency Points, by @gregory-f.
Use Ecency daily to boost your growth on platform!

Thanks for the boost Ecency and Gregory-F.