Every now and then I like to do a straight up card giveaway. Like all my giveaways entry requirements are minimal. Today we will be giving away not one, not two but three Splinterland cards. Two commons and one Rare to be exact. Which ones and how can you win? All will be revealed in this short to the point post. Good luck to all who enter! 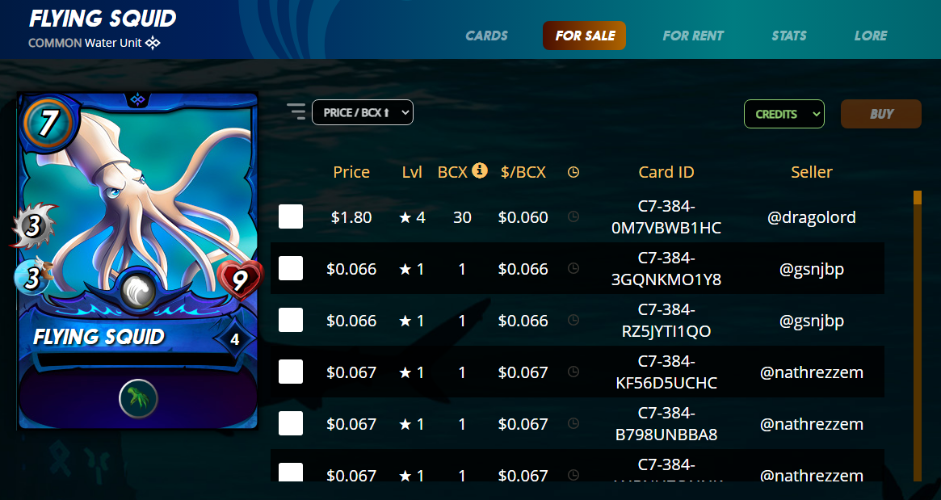 I have not yet used the Flying Squid in battle but it looks like a beast of a card. At level one it has an eight life and a mele attack of two with a speed of three. It is also equipped with the reach ability (Allows monsters to attack from the second position). 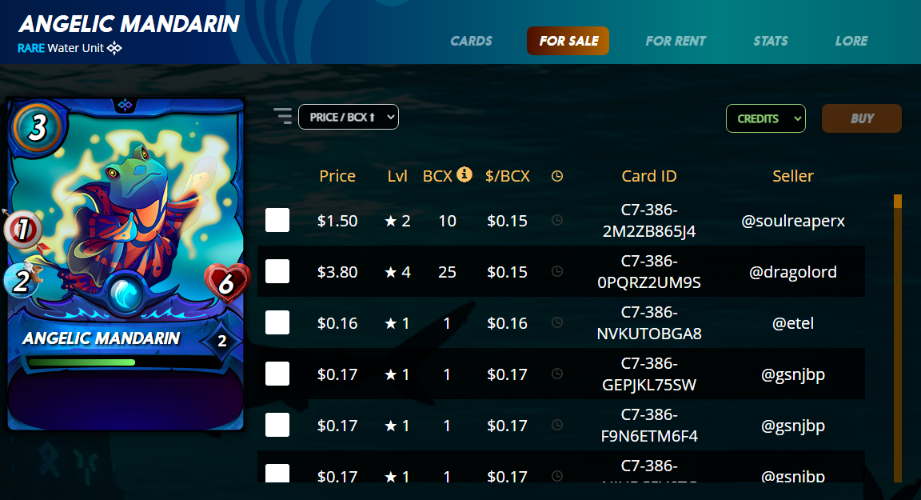 Sticking with the Water Splinter the Rare Monster that will be included in this giveaway is Angelic Mandarin. It has a low mana cost of just three with a health of five. Its attack is one with a speed of two. This monster doesn't come with any abilities at level one but with a cost of just 3 mana its a keeper.

How A Winner Is Chosen:

The great random number generator will decide who the winner is. Everyone who enters will get one raffle ticket. The timing of your comment decides your raffle ticket number. If the great random number generator picks your comment you will be sent the Rare Splinterlands card known as Angelic Mandarin. The two Hivens you tag will each get sent the Splinterlands common card known as Flying Squid. Please don't tag your alt accounts. A variety of the already beautiful mandarinfish, the Angelic Mandarinfish is said to be blessed by the magic of the sea. They swim in the most gorgeous of tropical waters, and live peaceful lives in harmony with all around them. It is said that the touch of an Angelic Mandarinfish has healing properties. And that if one sees an injured person in need, they will swim up and stare into your eyes. As if looking into your soul. If they deem you to be kind, they will heal your wounds.
The sailor sunk deep into the depths of the cold water. He closed his mouth tightly, trying to preserve any air he had left. But the violent shipwreck had knocked the wind out of him. Trails of blood from his wounds blossomed into the water around him.

His mind told him to swim. Swim up and to air. Swim up and live. But his body wouldn't cooperate. Just as he felt unconsciousness tugging at him, there was movement. The glimmer of bright colors through the dark of the water.

A single fish swam to him. It was beautiful; it glowed with an internal light. The fish looked directly into his eyes. He stared back, barely hanging on to consciousness.

And then suddenly a surge of energy went through him. His wounds closed, and his lungs were filled with air. The fish turned and swam off. And the sailor kicked up to the surface of the water. Lore taken from official Splinterlands site.

To Watch A Splinterlands Battle

I want to participate @emeka4
I choose @rufans and @adedayoolumide

Keep up the great work!
tagging @siberian12 and @lorddiablo

When next Torpedo Challenge (Though I know that is a lot of time and effort, but I love it too much :D)
!PIZZA for you

You are right, it has has been awhile since we played a good game of Battle-Hive. I will need to put one up sometime soon. Thanks for the reminder.

You can now send $PIZZA tips in Discord via tip.cc!

@flauwy @thebeardflex
Have a slice of !PIZZA because I'm not below bribery. (Jk) 🤣🤣🤣

Have some tip tokens :)

lolztoken.com
What's green and sits in the corner?
A naughty frog.
Credit: fallingforward
@wanderingmoon, I sent you an $LOLZ on behalf of @rentmoney
Use the !LOL or !LOLZ command to share a joke and an $LOLZ. (2/6)
0
0
0.000
Reply

I'm gunna tag @letsjam and @torran for this one. I was gunna break the rules again and tag a third cuz rules suck, but there's only 2 Flying Squids... Unless... we do fractional ownership of Flying Squids... and... lets see, they have 10 tentacles each...

Should I tag 18 more people and they'll each get a fractional Flying Squid Tentacle NFT? Hmmmm...

Have some tip tokens.

Thanks for the giveaway. @kryptodenno and @bernaku, maybe you’d be interested in this giveaway? IGN: squishna

I love Flying Squid, even more than Angelic Mandarin. It's really good in battle! Try it out! Thank you for the giveaway!

Wow, that is a great giveaway! Thanks for doing it!
I tag @chaosmagic23 and @luthien12 and hope we can win those cards!

Have a great day!

lolztoken.com
My doctor said he could help me stop dreaming of cows playing football
I asked him to wait till after finals.
Credit: adedayoolumide
@rentmoney, I sent you an $LOLZ on behalf of @bitpizza
Use the !LOL or !LOLZ command to share a joke and an $LOLZ. (1/4)
0
0
0.000
Reply

Hey @rentmoney, here is a little bit of BEER from @bitpizza for you. Enjoy it!

Congratulations @rentmoney! You have completed the following achievement on the Hive blockchain and have been rewarded with new badge(s):

I want to participate in this splinterlands giveaway.
Tagging @savvyplayer and @dudeontheweb

Thanks for tagging me.

First Up: @wynella, check this post for a chance to grow your deck.

Then, @craigcryptoking ... YOU need to check this post and START your deck... how much longer are you gonna keep your head in the sand? !LOLZ

lolztoken.com
What’s the best thing about Switzerland?
I don’t know, but the flag is a big plus.
Credit: thales7
@rentmoney, I sent you an $LOLZ on behalf of @braaiboy
Use the !LOL or !LOLZ command to share a joke and an $LOLZ. (1/1)
0
0
0.000
Reply

Hey @rentmoney, here is a little bit of BEER from @braaiboy for you. Enjoy it!

!1UP100 Very nice a meme in a post with some Splinterlands! !Giphy !LOLZ !PIZZA !PGM

lolztoken.com
Knock knock...
ERROR: Joke failed.
@dynamicrypto, You need more $LOLZ to use this command. The minimum requirement is 16.0 LOLZ.
You can get more $LOLZ on HE.
0
0
0.000
Reply

Delegate your tribe tokens to our Cartel curation accounts and earn daily rewards. Join the family on Discord.